After a career in the construction industry, which took him to most parts of Australia, the Middle East, Eastern Europe and West Africa, Ray and his wife retired to the picturesque Northern Rivers region of New South Wales, Australia, and he commenced writing.

Their daughter and three grandchildren live closeby while their son and two more grandchildren are in a suburb of Perth, on the opposite side of Australia.

Ray’s travels, for work and for pleasure, have taken him to many parts of the world and, at his latest count, he has visited around fifty countries, with a few more trips currently on the horizon. In May he will return to the island of Bali and in July/August he will visit Alaska, the Canadian Rockies and eastern Canada 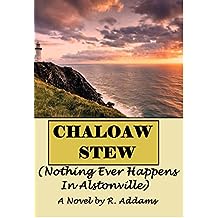 Ray’s initial book was Chaloaw Stew, a hard-hitting crime thriller, set mainly in the coastal town of Byron Bay. The abhorrent crimes described in the novel draw on publicised events in various parts of the world, with Byron Bay used as a backdrop only.

Chaloaw Stew introduces Detective Chris Johnson as the protagonist, a straight talking lady who will stop at nothing to trap and catch the gang of criminals involved. A prequel to Chaloaw Stew (I Am Chris!), is underway and should be released later this year.

After some criticism of the gruesome nature of the first book, Ray began writing in more of a Cozy Crime genre, and introduced a character named Poppa Roy Addams, a retired amateur detective who dabbles in spiritualism to help solve cases.

The first novel featuring Poppa Roy is Seeking Skye, set in Lismore, the regional center of the Northern Rivers.

Etropole is the second in the Poppa Roy series, set mainly in Bulgaria and drawing on Ray’s observations and experiences in the three years he lived and worked there.

Echoes of ElMina is set in Ghana, West Africa and has Poppa Roy experiencing the horrors of slavery while learning the targeted spirit writing techniques which he uses in his later adventures.

The last novel Ray published is Nimbin Rocks. This book has Poppa Roy helping to expose a Wiccan cult operating in the small, alternative town of Nimbin, which is approximately forty minutes drive from Lismore.

All books are available as ebooks from Smashwords and its associated companies, and Amazon Kindle, with print on demand copies from Amazon (see highlighted links above).